By their composition, Soybeans are very interesting for animal nutrition. Indeed their contain between 18 and 20% of fat, source of energy; between 35 and 38% of proteins, but also many anti-nutritional factors preventing good beans assimilation by various digestives systems. In particular proteases (trypsin inhibitors) preventing beans digestion, hematoagglutinins (lecthins) that prevent nutrients absorption but also allergenic factors that can affect especially milk calves. In order to benefit most of soy beans nutritional components, extrusion is the best treatment. In fact, it improves proteins digestibility by 11%, lysine by 14%, methionine by 11% and cystine by 5% compared to raw beans, but also by reducing raw amino acid content and therefore undigested protein.

In order to obtain a product with a lower energy intake facilitating rations balance, it is attractive to operate a partial extruded beans deoiling. By this way, fat content decreases from 20% to about 5.4% in meals while collecting a product with high added value: soybean oil. In animal feed, the element feed industry are looking for is protein level. Lowering fat content permitted to increase meals protein rate while collecting a co-product.

The conventional method includes two phases, as shown in the figure below. In order to further reduce meals fat proportion, a solution under study is adding to extruders’ barrel a special chamber to collect oil. Therefore fat content at extruders exit is 1 to 2% lower, facilitating presses work which can then produce meals with a lower fat rate. 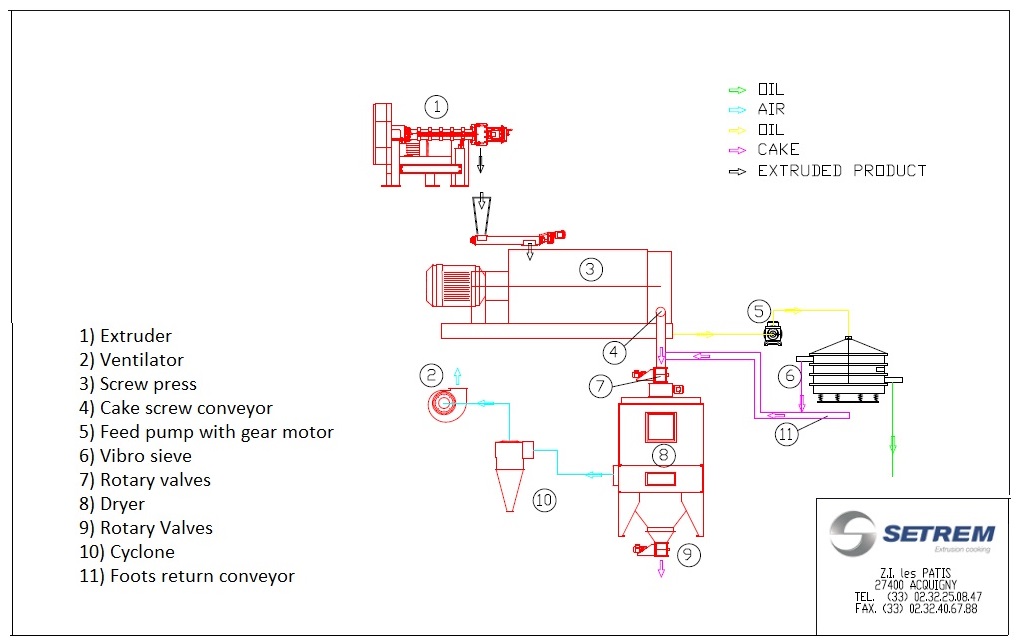 Dry extrusion allows beans to be cooked at a high temperature, around 150°C for a very short time of a few tens of seconds. Heat is provided by mechanical energy created by shear and friction forces in extruders. In extruders’ barrel, water naturally present in beans remains liquid because of high pressure (several tens of bars), but, on dies’ exit, beans regain atmospheric pressure which causes:

Extrusion allows a better bean deoiling than flattening-cooking-pressure (FCP) method, indeed at extruder’s exit, cells containing fat are destroyed and oil is free. Also extruders work as preparers; it allows presses to have better performances, to work at higher rates and to have lower rates of wear. Experiments show that meals contain an average of 1.3% less oil than FCP meals. In addition, as shown in the table below, extrusion and then pressing treatment produces greater output of both oil and meal while having less water losses.

As outlined in the table below, extrusion then pressure produces meals containing about 45% protein and a fourfold division of antitrypsic factors. In addition, treated products are very stable, accepting a conservation of several months through lipases and lipoxidase destruction, and low free water content. This avoids preservatives addition; since products are not affected by rancidity, oxidation or mold.

From an economic point of view, it is important to know the cost  of this treatment per ton of soybean. Assuming a factory produce 20,000 tons per year corresponding to an average of 3 tons per hour, budgets are summarized in the table below:

Excluding raw material, an extruded and then squeezed soybeans ton cost is less than 35 €.